What are the differences between an HDMI Splitter, a Switch, and a Matrix?

Are you looking to create a specific setup and possibly have multiple HDMI components or perhaps multiple displays you want to send an HDMI signal to and aren’t quite sure what device to use? We at Monoprice can assist with that. You will most likely need one of three devices; an HDMI splitter, HDMI switch, or an HDMI Matrix. The following article will help you narrow down which one of the three devices will be the right one for your specific set up.

An HDMI splitter is going to be the simplest of the three. This type of device will have a single input and multiple outputs on it. This would be used to connect a single source and output it to multiple displays. (Please refer to the image below for example.) One thing to take into consideration when it comes to HDMI splitters is the resolution. For example, if a source supports 1080p at the most, then the displays must be able to support that or lower resolutions that both the displays and the source can commonly adjust to. If there is an issue with a splitter in which any display after the first one is having issues displaying the source signal, then the lowest common resolution display must be connected to output 1 on a splitter and then if there is still no signal coming on the displays, a power cycle must be done to rest it and tried again. 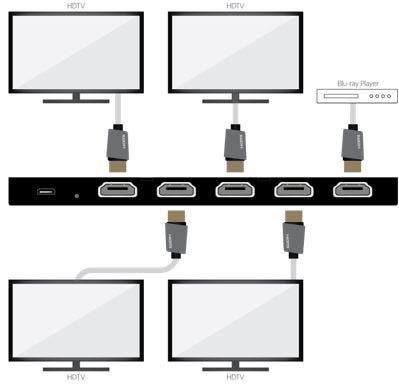 An HDMI switch will have multiple inputs and a single output on it. In other words, multiple sources would connect to a single display. (Please refer to the image below for example.) This does not mean that all the source signals will appear on the display at the same time. The device will allow you to switch between sources and display each signal at a time, individually on the one display. Some HDMI switches also include the option to set a certain resolution to have the switch work with through an EDID (Extended Display Identification Data) dip switch. The dip switch can set to a specific pattern that matches a specific chosen resolution. The patterns should be explained in the device’s manual. When the specific resolution is set on the EDID dip switch, it is highly recommended to set it to a resolution that all the sources and the display support. Some switches will also have an RS-232 port, which is used to connect to a computer or a central control system to control the switch. They may also include IR (Infrared radiation) ports for IR signal control of a source or display if they are out of sight. There are also some instances when the switch may include audio outputs to connect out to a home theater receiver or a soundbar. 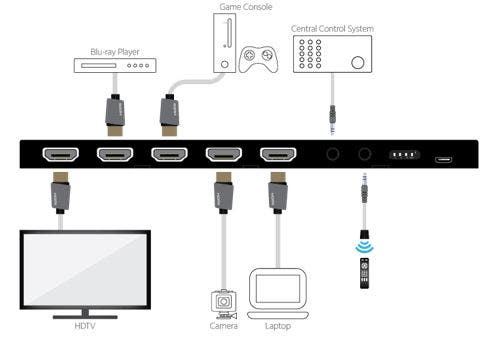 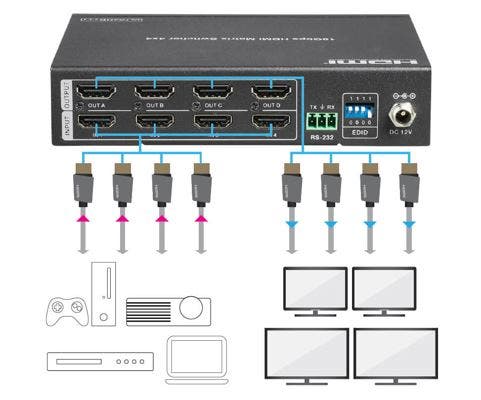 Choose files or drag and drop files
TweetShare on Facebook